“I am in the House Chambers. We have been instructed to lie down on the floor and put on our gas masks.” 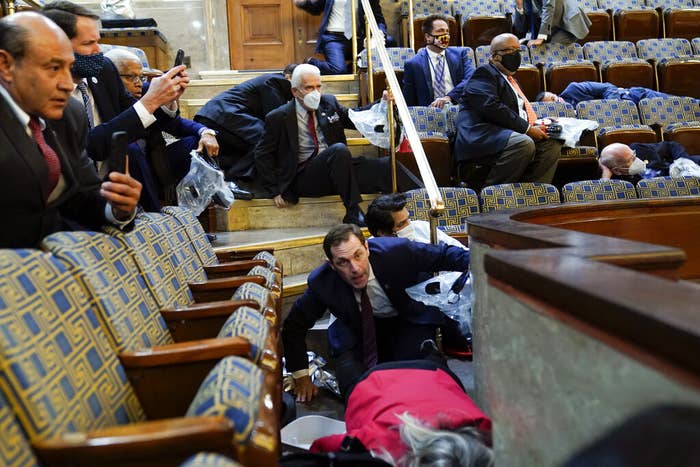 In an  unprecedented attempted coup , a pro-Trump mob — incited by the president’s dangerous lies about a stolen election — pushed past police to storm the Capitol building on Wednesday.

Their acts of domestic terrorism in the halls of Congress forced lawmakers to duck and hide inside the House gallery, take shelter, and evacuate to undisclosed locations inside the Capitol while wearing “escape hoods” designed to help breathe in the case of tear gas or fires.

Members of the Senate and House, who were at the Capitol to certify Joe Biden’s victory, described the moments of terror as the mob walked freely through the building,  breaching the offices of Congress members , and engaging in an armed standoff with law enforcement as they attempted to break into the House chamber.

Capitol Police ordered two buildings on the Capitol campus to be evacuated due to “police activity” as the rioters first broke through the barriers at the Capitol in the afternoon.

Some House members described being evacuated early on.

Rep. Elaine Luria  said  she had to evacuate due to reports of a pipe bomb. The New York Times  reported  that a pipe bomb had been found at the headquarters of the Republican National Convention, which is a few blocks away from the Capitol.

Inside the Capitol, Michigan Rep. Dan Kildee described how he had to lie down on the floor of the House and put on a gas mask as Trump supporters banged on the door of the chamber, prompting law enforcement to draw their guns. 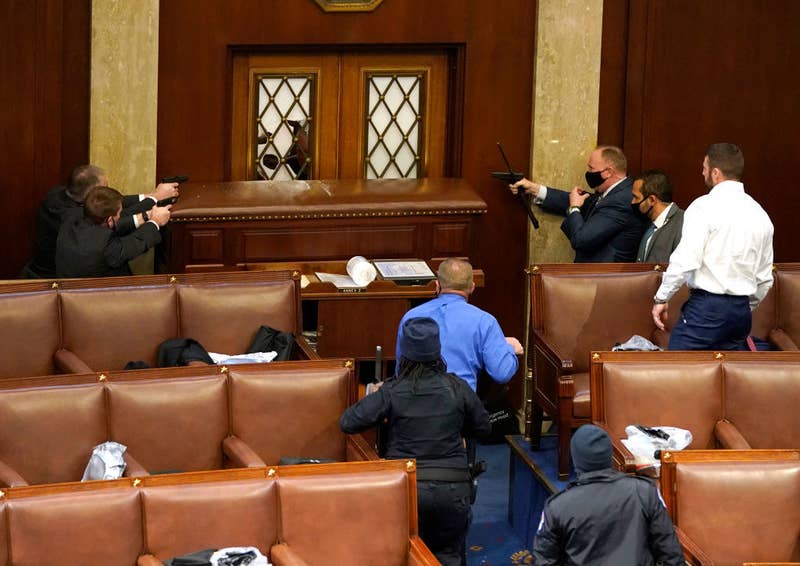 Members of Congress were instructed to wear gas masks or escape hoods as they were being evacuated or taking shelter. 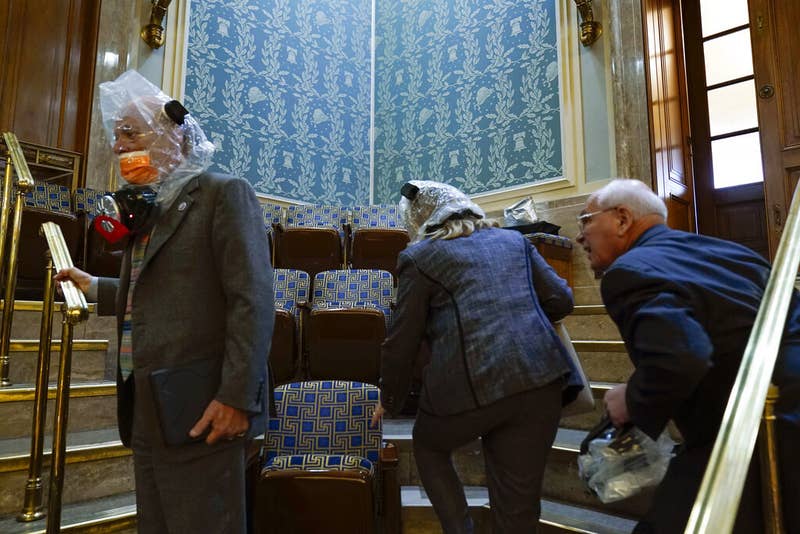 Colorado Rep. Jason Crow was captured in a photo comforting his Pennsylvania colleague, Rep. Susan Wild, while they took cover in the House gallery. 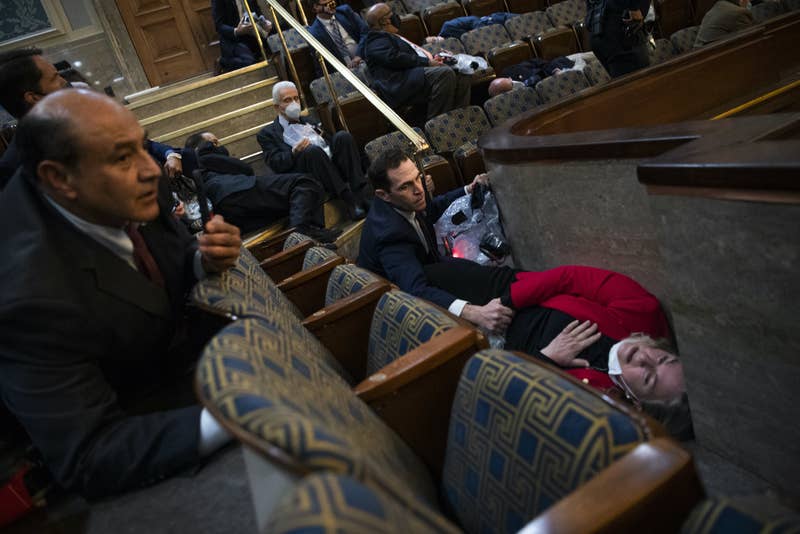 Texas Rep. Sheila Jackson Lee tweeted a photo of people ducking behind seats in the House chamber, saying, “I am safe and will not fear or leave because of this unwarranted and shameless violence.”

Pennsylvania Rep. Dan Meuser said he stayed back in the House chamber “trying to help secure the doors.”

Texas Rep. Vicente Gonzalez, who was inside the House chamber, described what happened when the rioters breached the Capitol.

Videos from inside the House gallery showed several members and reporters crouching and hiding behind seats, as Delaware Rep. Lisa Blunt Rochester said a prayer.

California Rep. Scott Peters told Hill pool reporters what it was like being evacuated from the House gallery as Trump supporters tried to break down the doors of the chamber and enter.

He said he saw people being ushered out from the floor below but said that he and others were instructed to “get a mask, be ready.”

And then started to get us to snake around the back of the gallery, under the rails and stuff, so we did that for a while. And when they stopped us, when we got over to other side of the gallery, the Republican side, they made us all get down, you could see that they were fending off some sort of assault, it looked like.

They had a piece of furniture up against the door, the door, the entry to the floor from the Rotunda, and they had guns pulled. And they just told us to take our pins off. I think we would have been pretty easily identified without our pins, but anyway we took our pins off, and then finally at one point they got us a way to get off the gallery floor, and then so we snaked over to the evacuation.

He also described the fear the people felt while hiding in the gallery.

“Some people were pretty scared up there,” he said. He said it felt like they were “well defended,” but added, “it sure did appear pretty close to us today.” 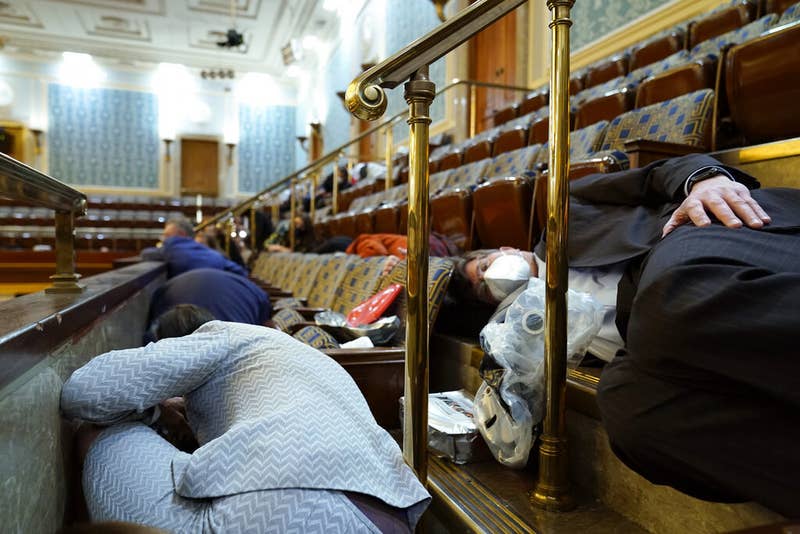 Another member of Congress, Rep. Pete Aguilar from California, who was in the House chamber, told Hill reporters that he messaged his wife and his family about his safety and followed the guidance of Capitol Police.

Many other members of Congress tweeted they were safe but denounced the violence inflamed by Trump’s rhetoric.