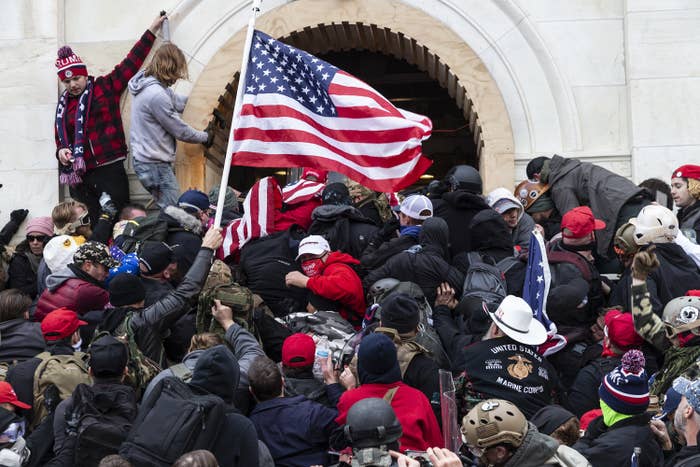 The FBI has found hundreds of files of detailed instructions on how to make guns, poisons, and bombs in the home of a man arrested for participating in the Jan. 6 insurrection at the Capitol.

Dominic Pezzola — a member of the Proud Boys, an extremist pro-Trump group — was caught in pictures and videos smashing in a window of the Capitol building with a police shield, allowing rioters to get in, the FBI found. In a  memo  arguing that Pezzola should be jailed ahead of his trial, the government also accuses him of overtaking a line of police in riot gear and being in the group of people who chased  Officer Eugene Goodman  up the stairs near the Senate chamber.

The memo details an interview with a witness, who told the FBI that Pezzola, known online as “Spaz,” was part of a group of people who stormed the Capitol, all of whom “had firearms or access to firearms” and had said that they “planned to kill every single ‘m-fer’ they can.”

The witness also said that Pezzola and his group “would have killed Mike Pence if given the chance.”

After the insurrection, Pezzola at first tried to flee, the memo states, turning off his phone, shaving his wild beard, and leaving his home in the Rochester, New York, area. After the FBI began knocking on the doors of family members, he turned himself in. Then, the FBI conducted a search of his house.

The memo states that the FBI found a thumb drive in “a room that appeared to be used exclusively by the defendant” containing hundreds of files with these and similar titles: “Advanced Improvised Explosives,” “Explosive Dusts,” “Incendiaries,” “The Box Tube MAC-11: The Ultimate DIY Machine Pistol,” “Ragnar’s Big Book of Homemade Weapons,” and “The Advanced Anarchist’s Arsenal: Recipes for Improvised Incendiaries and Explosives.”

“Pezzola poses both a serious danger to the community and a serious risk of flight,” the memo states. “The circumstances of the offenses charged in this case overwhelmingly support detention. The seriousness of the offenses with which the defendant is charged cannot be overstated.”

He was arrested in New York and is currently being held as he awaits a hearing. A judge will determine whether to continue his detention as the case moves through the courts. He is currently charged with destroying government property, obstructing an official proceeding (the congressional vote to validate Joe Biden’s presidential win), and entering the Capitol.

The memo and an  affidavit submitted by an FBI agent  track Pezzola’s progress up to and inside of the Capitol through a series of videos and images posted to Parler and other social media platforms. The images appear to show him wrestling with a line of police and grabbing one of their shields before climbing up to a window of the Capitol and smashing his way in, along with others around him. Once inside, the files state, he and members of the group he was with attempted to pressure a police officer into telling them where members of Congress were. The videos and pictures appear to show him with an earpiece, a device others who stormed the Capitol have been pictured wearing as well. The videos also show him smoking a cigar near the Senate chamber, saying, “I knew we could take this motherfucker over [if we] just tried hard enough.”

In some of the social media posts the FBI attributed to Pezzola, he identifies as a member of the Proud Boys, who had a heavy presence at the Jan. 6 riot, as well as a veteran of the Marines. A tattoo on his right arm signifies the Infantry Assault Marine military occupational specialty,  according to the Daily Beast .

His next hearing, on whether to keep him in detention, will be on Feb. 1.