The judge called one of Jacob Chansley’s arguments for pretrial release “so frivolous as to insult the Court’s intelligence.” 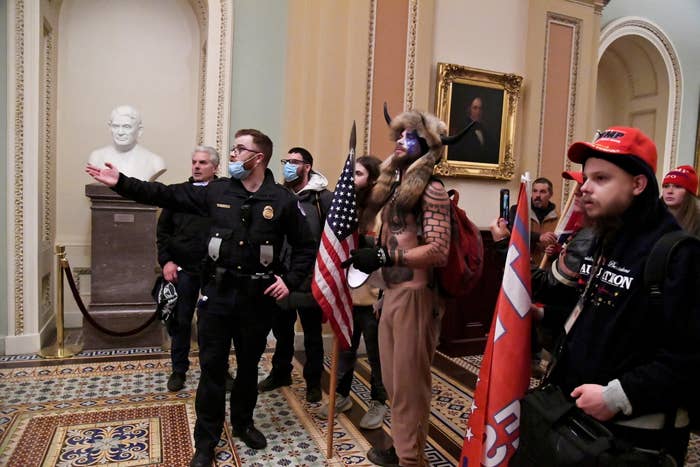 WASHINGTON — Jacob Chansley, an Arizona man known as the “QAnon shaman” and charged in the  Jan. 6 insurrection , lost his latest effort to get out of jail, with a judge slamming his arguments as “meritless,” “unpersuasive,” and “frivolous.”

Chansley, who was photographed shirtless and wearing a horned headdress and face paint on the Senate dais during the riot, has spent the weeks since his January arrest waging a more public-facing defense campaign than the rest of the nearly 300 others who have been arrested so far. That effort culminated in an interview Chansley taped from jail that  aired on 60 Minutes+  last week — which ended up only hurting his case for release.

In a 32-page  opinion  on Monday denying Chansley’s request for pretrial release, US District Judge Royce Lamberth called the interview a “media publicity stunt.” The judge wrote that Chansley’s comments showed he didn’t understand the gravity of the crimes he was charged with and contradicted information he’d presented to the court. If released, he would have gone to stay with his mother, and Lamberth concluded that she wouldn’t be a reliable custodian since she, too, spoke with 60 Minutes+ and told the interviewer that she didn’t think her son had done anything wrong.

“The Court cannot overstate the gravity of defendant’s conduct on January 6th. Were defendant released pending trial, he would have the opportunity to again attempt to disrupt the United States government or harm members of Congress,” Lamberth wrote. “His flagrant disrespect for law enforcement indicates that he would not adhere to conditions imposed by this Court.”

Lamberth expressed incredulity at Chansley’s argument that he needed to be released because the pandemic had made it hard to meet with his lawyer, Al Watkins. The judge noted that Chansley had appeared in the 60 Minutes+ interview via a videoconference with Watkins.

The vast majority of people charged with participating in the riot at the Capitol on Jan. 6  have been allowed to go home  as their cases go forward, with no objection from the government. Prosecutors have generally reserved detention fights for cases that involve defendants charged with assaulting police, carrying weapons, planning for violence, or taking a leadership role in the insurrection.

Chansley had called the FBI the day after the Capitol assault and not only confessed to participating in the insurrection but said he had planned to come back to Washington to protest President Joe Biden’s inauguration, according to his charging papers. He was arrested on Jan. 9 after driving to an FBI field office in Phoenix to speak with investigators, apparently unaware that charges had been filed against him under seal; the headdress he was photographed wearing inside the Capitol was in his car, along with face paint, a 6-foot spear, and a bullhorn. He’s been in custody since then.

He is facing a six-count indictment, which includes two felony counts for obstructing law enforcement and obstructing Congress. He  first tried to argue for release  at a Jan. 15 hearing before a federal magistrate judge in Phoenix. That judge wasn’t persuaded, finding that Chansley’s “actions and words demonstrate he’s willing to participate in the violent disruption of the work of our government” and saying that she had “no confidence he will follow my court orders.”

He had previously come before Lamberth to ask the judge to order officials at the DC Jail to provide him with an all-organic diet, which he said was a necessary part of his religious beliefs as a shaman, or to release him altogether. The judge ordered Chansley transferred to a jail in Alexandria, Virginia, which was able to provide organic meals.

Last month, Watkins filed a new round of arguments for pretrial release, insisting that Chansley wasn’t a danger and that he’d become disillusioned by former president Donald Trump and had disavowed his support. Watkins also argued that Chansley’s religious beliefs meant he couldn’t get a COVID-19 vaccine, which put him at higher risk of contracting the disease if he remained in jail, as well as the fact that the pandemic had made it difficult for the two men to communicate.

Prosecutors had argued that Chansley met the criteria for pretrial detention because he was accused of carrying a dangerous weapon in the Capitol — a 6-foot pole with a metal spearhead attached to the top. Chansley disputed that it was a weapon. Lamberth sided with the government, writing that it was “undoubtedly” a dangerous weapon, even if Chansley wasn’t accused of using it against anyone.

The judge wrote that Chansley and his lawyer had tried to “manipulate the evidence and minimize the seriousness” of what he was accused of doing, which included leaving a handwritten note for then–vice president Mike Pence on the dais that read, “ITS ONLY A MATTER OF TIME JUSTICE IS COMING!” Lamberth found that Chansley’s arguments that he was only following Trump’s direction didn’t help, since that showed his “inability (or refusal) to exercise independent judgment and confirm his behavior to the law.” The judge also noted that Chansley had said he didn’t regret his loyalty to Trump during the 60 Minutes+ interview.

Chansley’s comments during the interview showed “a detachment from reality” and demonstrated that he didn’t “fully appreciate the severity of the allegations against him,” Lamberth found.

“To the contrary, he believes that he — not the American people or members of Congress — was the victim on January 6th,” the judge wrote.

Emotional Mother And Kids Moments We Captured In Weddings